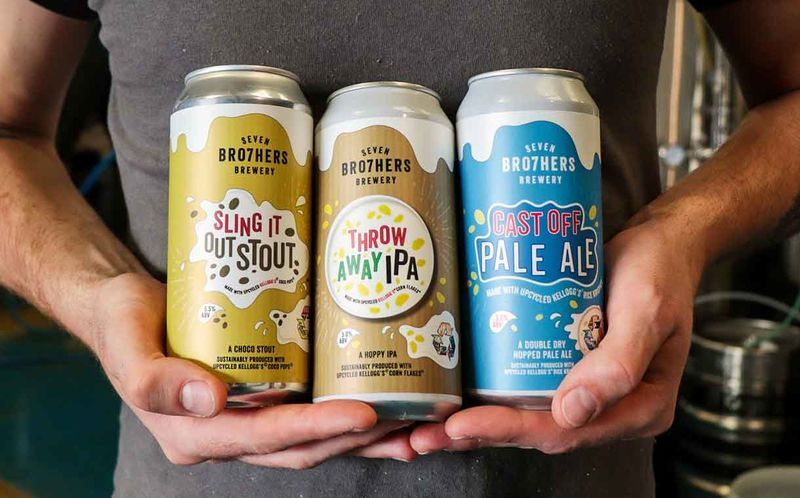 These New Seven Bro7hers Beers are Made with Kellogg's Cereals

Michael Hemsworth — June 14, 2019 — Lifestyle
References: sevenbro7hers & foodbev
Share on Facebook Share on Twitter Share on LinkedIn Share on Pinterest
These new Seven Bro7hers beers have been unveiled as a followup to the UK-based brewery's initial Kellogg's x Seven Bro7hers Throw Away IPA which was made with discarded Corn Flakes to offer consumers a tasty libation to consume this summer.

The new beers include the Sling It Out Stout and the Cast Off Pale Ale, which are made with Kellogg's Coco Pops and Rice Krispies, respectively. Each of the Seven Bro7hers beers have a 5.5% ABV and are made from discarded ingredients from the Kellogg's Manchester factory to give the food waste a new purpose.

Keith McAcvoy, one of the seven brothers who started the Seven Bro7hers Brewery spoke on the new beers saying, "Working with Kellogg’s on the production of our first sustainability conscious beer Throw Away IPA was amazing. To carry on with this partnership and create two new exciting craft beers is even better. We are extremely proud to be working with Kellogg’s and being part of the fight against food waste.”
4.6
Score
Popularity
Activity
Freshness
Get the 2023 Trend Report FREE