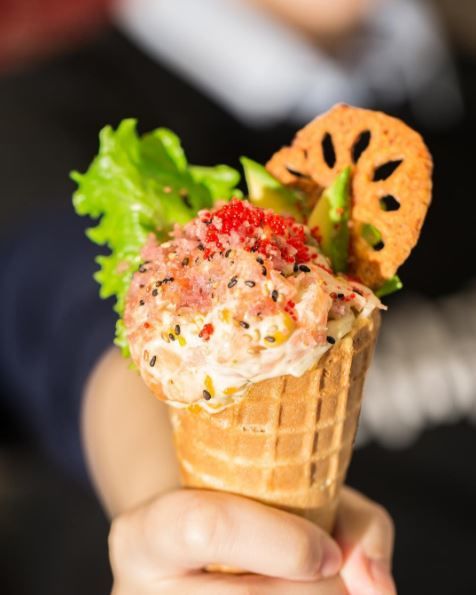 Joey Haar — November 19, 2016 — Lifestyle
References: rolltation & thestar
'Rolltation,' a modern Japanese restaurant in Toronto's up-and-coming Little Tokyo neighborhood, is on the cutting-edge of Japanese cuisine. The restaurant has found success with its sushi burritos (a white rice and seaweed wrap filled with a selection of sushi ingredients) and it is continuing to push the limits of what constitutes a sushi dish with the new sushi cones.

As the name implies, Rolltation's sushi cones are sushi ingredients stacked on top of an ice cream cone. Like the sushi burritos that popularized the restaurant among Toronto foodies, the snack's appeal is in its hybridization. Rolltation's concoction puts a sweet spin on sushi, since the ice cream cones themselves are a sugary and rich complement to the traditional Japanese fare.
4.1
Score
Popularity
Activity
Freshness