Robotic Exoskeleton to Aid the Elderly or Workers 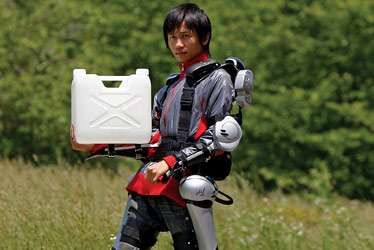 From the Japan Times:
TSUKUBA, Ibaraki Pref. -- Scientist Yoshiyuki Sankai was fascinated in his childhood by robots depicted in the U.S. literary classic "I, Robot" as well as Japanese comic books such as "Cyborg 009" and "Tetsujin No. 28."
Now he has become the creator of one of the world's most advanced robotic technologies: a robot suit.
The lower-body suit, called Hybrid Assistive Limb-3, is designed to help disabled or elderly people smoothly perform everyday activities such as walking and climbing up and down stairs. It will go on sale later this year as the world's first commercial product of its kind.

"As a child, I was thrilled at the possibility that machines can help people expand their (physical) abilities, and I still have that feeling," said Sankai, 46, a professor at the University of Tsukuba's institute of systems and engineering mechanics. "As a researcher, I have been working on projects to study how to supplement weakened human functions by (using) machines."

From Time:
Mecha-Grandma! Japanese researchers have developed a robotic exoskeleton to help the elderly and disabled walk and even lift heavy objects like the jug of water above. It's called the Hybrid Assistive Limb, or HAL. (The inventor has obviously never seen 2001: A Space Odyssey.) Its brain is a computer (housed in a backpack) that learns to mimic the wearer's gait and posture; bioelectric sensors pick up signals transmitted from the brain to the muscles, so it can anticipate movements the moment the wearer thinks of them. A commercial version is in the works. Just don't let it near the pod-bay doors.