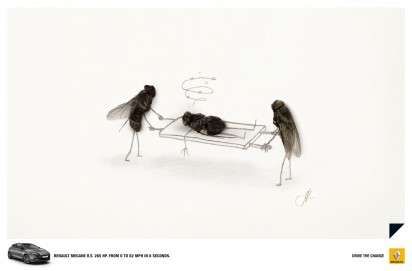 Meghan Young — June 9, 2012 — Autos
References: publicis & ibelieveinadv
Share on Facebook Share on Twitter Share on LinkedIn Share on Pinterest
The Renault Megane R.S. 265 HP ad campaign shows that this car goes so fast that it will unfortunately leave some insects injured. Flying into windshields is already a hazard, but when the windshield belongs to a car that can go from 0 to 62 MPH in 6 seconds, it gets exponentially more dangerous.

Conceived and executed by the Publicis ad agency based in Brussels, Belgium, the Renault Megane R.S. 265 HP ad campaign shot by the talented and imaginative photographer Magnus Muhr. Since his first dead fly photo project back in 2009, he has created other similar series, which includes the Capital Bee Campaign. It was art directed by Sophie Norman with copy by Eric Piette.
6.1
Score
Popularity
Activity
Freshness
Get Better and Faster