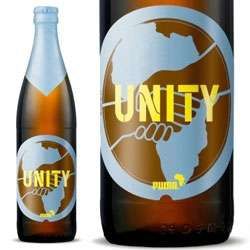 Alex Scott — March 11, 2010 — Marketing
References: cherryflava & swipelife
Share on Facebook Share on Twitter Share on LinkedIn Share on Pinterest
If someone asked me what a beer by PUMA would taste like, I might shake my head and answer "rubber soles and leather." Indeed, that's what one would naturally think. Never fear though, the PUMA Unity beer won't be made from their fitness gear. The company is teaming up with brewers Collective Sao Gabriel to create a special brew for this year's World Cup.

The PUMA Unity Beer is marketed with the message of promoting sportsmanship and working together towards a single goal. The beverage has not yet been released so the taste is unknown. I bet it will taste better than a pair of runners, though.
4.9
Score
Popularity
Activity
Freshness
View Innovation Webinars

Beer for the Blind