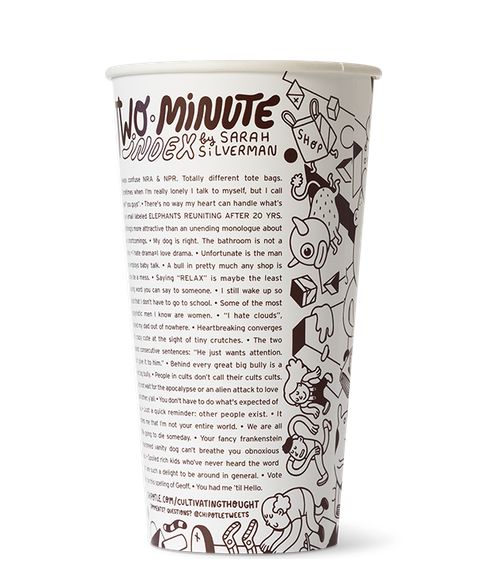 Laura McQuarrie — May 17, 2014 — Lifestyle
References: cultivatingthought & gizmodo
Share on Facebook Share on Twitter Share on LinkedIn Share on Pinterest
As part of the 'Cultivating Thought' author series, Chipotle is printing its paper coffee cups and burrito bags with a number of original essays from ten different authors. The project was thought up by writer Jonathan Safran Foer as he was at a Chipotle and realized he had nothing to do, or nothing interesting to look at.

Foer is one one of the writers that contributed to the project, along with others like Malcom Gladwell, Sarah Silverman and Judd Apatow.

Chipotle expresses that its cups and bags have always has been a place for expressing "humor, thoughts, and ideas, in both word and design." The mini essays are posted on the Cultivating Thought website, but if you plan on going to Chipotle anytime soon, perhaps its better to save the reads for the restaurant.
3.1
Score
Popularity
Activity
Freshness
View Innovation Webinars