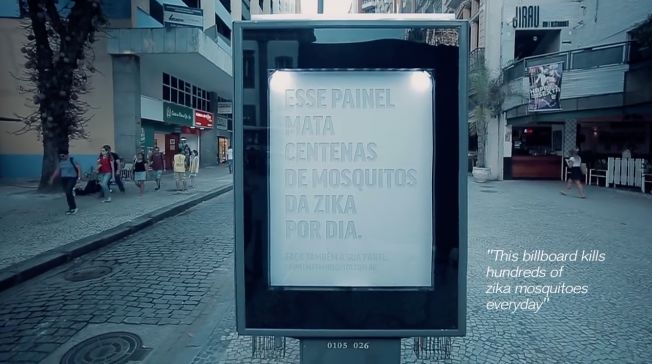 This Outdoor Billboard is Equipped with Panels to Kill Zika Mosquitoes

Laura McQuarrie — April 20, 2016 — Marketing
References: mosquitokillerbillboard & adweek
It might seem strange that Brazilian advertising agencies NBS and Posterscope teamed up to create an outdoor billboard that mimics the essence of human sweat and breath. While these are true traits of the billboard, these human-inspired scents are used as tools for luring the Aedes Aegypti mosquito, which is known to carry the Zika virus. The combinations of these scents are so potent, it's reported that they are effective in drawing mosquitoes that are as far as 2.5 miles away.

After the potent scent has captivated the interest of an insect, the mosquito becomes trapped and dies of dehydration. As a result, the all-white billboard ad reads: "This billboard kills hundreds of Zika mosquitoes every day."

'The Mosquito Killer Billboard' was placed in targeted areas where viruses carried by mosquitoes pose a serious threat to the community.
4.9
Score
Popularity
Activity
Freshness