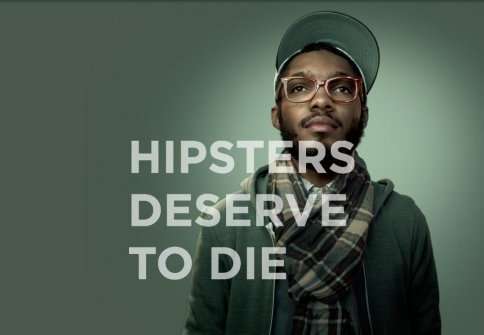 Katherinev123 — June 29, 2012 — Marketing
References: noonedeservestodie.org & adweek
Share on Facebook Share on Twitter Share on LinkedIn Share on Pinterest
Some people unfairly believe that those who have lung cancer deserve to get it, and now the agency Laughlin Constable, together with the Lung Cancer Alliance, is sending out the message that "No One Deserves to Die" through a series of provocative and polarizing advertisements.

Each of the ads shows an image of a social archetype, such as a hipster or crazy old aunt, along with the words, "[...] deserve to die." The agency launched the teaser ads around U.S. cities, but while their message was well-intentioned -- albiet very confusing if you don't pause to read the fine print or visit the campaign website -- the ads received tremendous backlash; some people even ripped the posters down in anger.

However, the actual message is the opposite of what's written on the posters, something you'll see if you scroll down to the bottom of the campaign's website. The site says," Many people believe that if you have lung cancer you did something to deserve it... Lung cancer doesn't discriminate, and neither should you. Help put an end to the stigma and the disease."

Although the ads are a very interesting and complex way to send a PSA, they're certainly shocking enough to elicit reactions and get attention.
6.7
Score
Popularity
Activity
Freshness
Get the 2021 Trend Report FREE