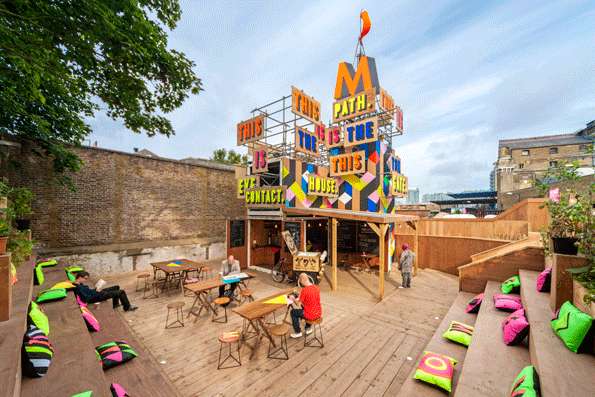 The Movement Cafe is an Artsy Space That Hosts Local Performers

Trenton Millar — September 9, 2012 — Social Good
References: themovementgreenwich & itsnicethat
The Movement Cafe is a temporary coffee shop and performance space that was opened in Greenwich for the opening of the London Olympic Games. The project was a collaboration between Morag Myerscough and Lemn Sissay, but the Movement Cafe is operated by a local charity called Greenwich Co-Operative Development Agency, which works with disadvantaged communities across London.

The incredible modern artsy design of the cafe combined with the amphitheater-like performance space make this cafe a place where creativity can really flourish. Come by any day to see live story telling, poetry readings or acoustic music. All the furniture in the Movement Cafe was created by Morag herself, and the food and drinks served by the cafe are all locally sourced (and delicious).

This is an amazing coffee joint to hang out in, especially considering it was built in just 16 days!
5.5
Score
Popularity
Activity
Freshness