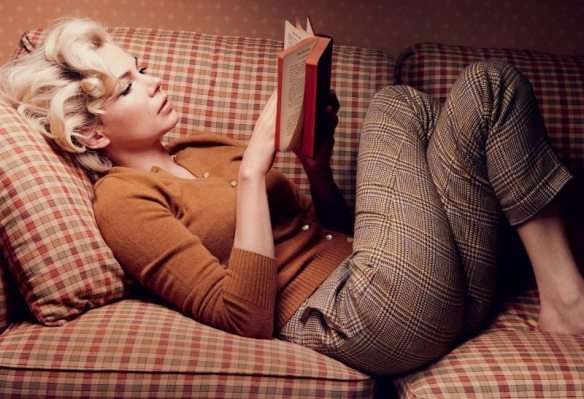 Corinne Guirgis — September 15, 2011 — Celebs
References: mymodernmet & piecesnmelodies
Share on Facebook Share on Twitter Share on LinkedIn Share on Pinterest
You'll have to do a double take when flipping through the Michelle Williams October 2011 Vogue US editorial, which has the young starlet embodying iconic 40s film icon Marilyn Monroe in a shoot appropriately entitled 'Being Marilyn.' Lensed by the controversial and talented Annie Lebowitz, the shoot is an extension of Williams' most adult and anticipated role in the upcoming fim 'My Week with Marilyn.'

Having made the move from teen television actress to serious movie star status over the past several years, Williams will define her transition with a shoot as sultry and seductive as this one, solidifying her role as both a fashion and sex icon. Styled by Tonne Goodman, Williams' retro wardrobe includes the designs of Donna Karan, Michael Kors, Ralph Lauren and J. Crew among others. In her most sophisticated shot, she dons a Monique Lhuillier champagne satin dress and Harry Winston diamond jewels.

Williams says in her interview with the mag that "The idea of playing such an iconic figure was daunting, but as soon as I finished the script, I knew that I wanted to do it, and then I spent six months trying to talk myself out of it. But I always knew that I never really had a choice."
5.9
Score
Popularity
Activity
Freshness
Get Trend Hunter Dashboard