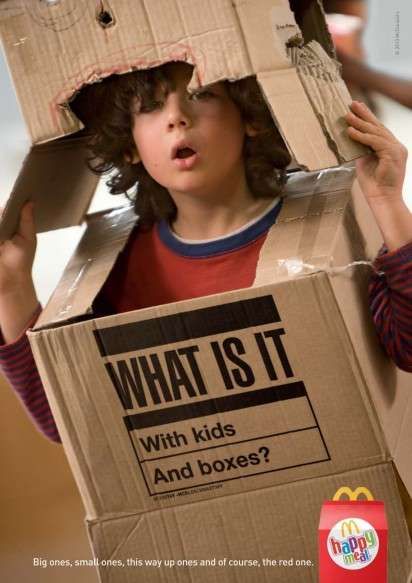 Meghan Young — April 15, 2013 — Marketing
References: leoburnett & ibelieveinadv
Share on Facebook Share on Twitter Share on LinkedIn Share on Pinterest
The McDonald's Happy Meal campaign reads, 'What is it with kids and boxes?' By pointing this fascination with the common cardboard box, the ad campaign addresses fun childhood memories as well as kid's ability to turn anything into a toy thanks to their boundless imaginations. In this case, the campaign draws attention to the fact that the Happy Meal also comes in a box. It elaborates, "Big ones, small ones, this way up ones and of course, the red one.”

Conceived and executed by the Leo Burnett ad agency branch based in London, United Kingdom, the McDonald's Happy Meal campaign was art directed and written by Guy Moore and Tony Malcolm with creative direction by Justin Tindall.
4.8
Score
Popularity
Activity
Freshness
Get Better and Faster