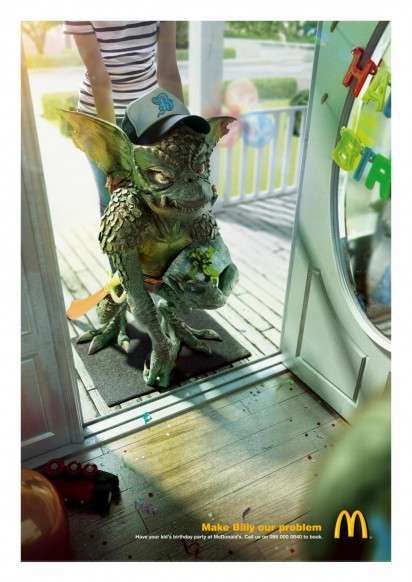 Meghan Young — June 22, 2012 — Marketing
References: ddb & ibelieveinadv
Share on Facebook Share on Twitter Share on LinkedIn Share on Pinterest
Children may not necessarily be monsters (although some parents and guardians may disagree), but the McDonald’s Birthday Party campaign does show that they can be difficult from time to time. Ok, it might depict children as the monsters and animals they are described from time to time, but the point is that unruly kids can be looked after, especially when given what they really want.

The McDonald’s Birthday Party campaign was conceived and executed by the DDB ad agency based in Johannesburg, South Africa. Overlaid on top of the image of a parent dropping a child off at their friend's house is the tag line, "Make [kid's name] our problem." There is no shame in parents looking for an easy way out sometimes, and that is exactly what McDonald's is proposing.
2.1
Score
Popularity
Activity
Freshness
Attend Future Festival