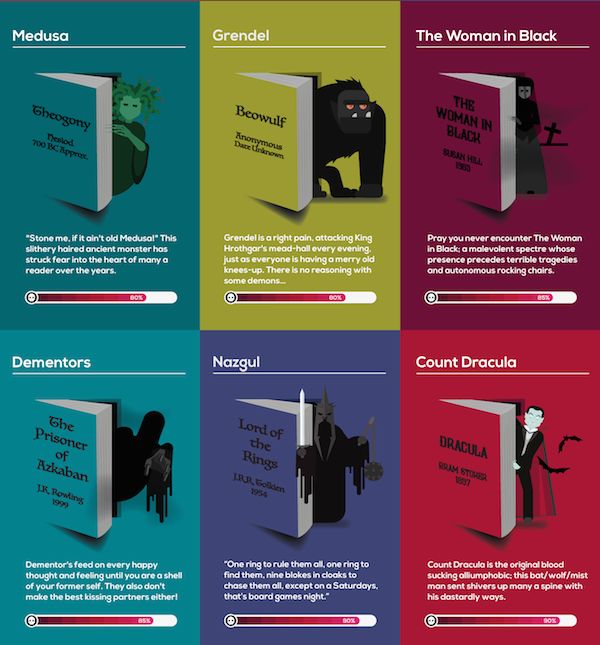 This Infographic Categorizes the Scariness of Monsters That Live in Books

Ady Floyd — October 6, 2015 — Pop Culture
References: morphsuits & designtaxi
Share on Facebook Share on Twitter Share on LinkedIn Share on Pinterest
Just in time for Halloween, the creative minds at MorphSuits designed this infographic to help explain and remind people of the literary monsters that live within popular books. The infographic is an educational tool that shows each viewer how scary a monster really is by rating the appearance, powers and evil intent.

The chart shows an illustrated image of each literary monster and then provides an overall score based on the comparison to other creatures. The chart titled 'Monsters in Literature' records ghoulish creatures from dementors, which appear throughout the iconic Harry Potter series to the White Walkers who appear throughout the Game of Thrones series.

Each monster is given a grade from zero to 100 percent based on how terrifying they are. The lowest score is 20 percent, which was given the giant squid in 'Twenty Thousand Leagues Under the Sea.' Then, the highest score, which was 100 percent, was given to Pennywise the clown in IT.
1.5
Score
Popularity
Activity
Freshness
Get Better and Faster

Monstrously Mythical Tees‏
This Unique Shirt from ‘Romwe’ is Beyond Freaky