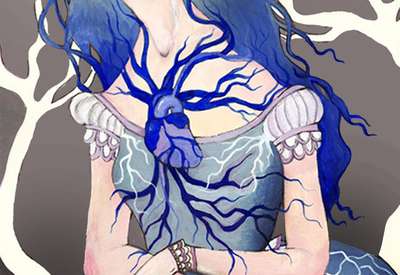 Lisa Perrin Incorporates Veins and Arteries into Her Illustrations

Jason Soy — February 6, 2012 — Art & Design
References: society6 & lacarpa.tumblr
Share on Facebook Share on Twitter Share on LinkedIn Share on Pinterest
Lisa Perrin may change up the concepts and subjects of her illustrations, but one consistent visual motif found in most of her renderings is blood vessels. Depending on the viewer, you may find these depictions elegant and light-hearted or rather morose and creepy due to the inclusion of arteries and veins. Personally, I think it’s rather inventive to paint blood vessels as though they’re stems of flowers, though admittedly, it is rather eerie to see a palpitating heart outside a subject’s body rather than inside their chest cavity.

Lisa Perrin currently resides near Maryland, New York, as she continues to pursue her MFA in Illustration. Her strength lies in creating visuals that are highly feminine, but with a macabre touch. This makes for provocative imagery that puts viewers at unease, but in a pleasurable way.
4.4
Score
Popularity
Activity
Freshness
View Innovation Webinars