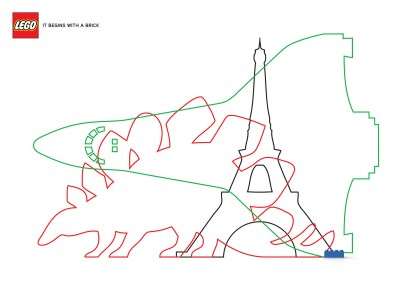 Meghan Young — October 29, 2012 — Marketing
References: jandl.sk & ibelieveinadv
Sky is the limit when it comes to a classic building block toy, as the LEGO 'It Begins With a Brick' ad campaign shows. All a person needs is a little bit of imagination and a gung-ho start. Placing a LEGO brick down on a table or floor is the first step to creating something magnificent, whether that is a horse, the Eiffel Tower or a rocket ship.

The LEGO 'It Begins With a Brick' ad campaign was created by Jandl, an ad agency based in Bratislava, Slovakia. It shows a single brick from which a multitude of sculpture possibilities branch out of. It was art directed by Pavel Gajdoš and Pavel Fuksa with design by Ivan Holic.
4
Score
Popularity
Activity
Freshness