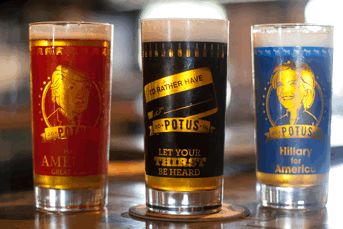 Katherine Pendrill — October 12, 2016 — Marketing
References: debate.wustl.edu & stltoday
Share on Facebook Share on Twitter Share on LinkedIn Share on Pinterest
To kick off the most recent presidential debate, Anheuser-Busch launched a series of promotions at Washington University in St. Louis. The activation not only marked the visit of the two presidential candidates to the University, but it also gave students a way to celebrate the momentous occasion.

Prior to the actual debate, Anheuser-Busch hosted a short parade across the Danforth Campus, led by its famous Budweiser Clydesdales. In addition to the parade, the brand also set up hospitality tents serving beer and snacks to debate attendees. One of the beers available was Anheuser-Busch's election-themed beer called 'Lilly's Lager.' The beer was named after the daughter of the company's co-founder, who is fittingly referred to as "the first lady" of the company.

The activation not only helped the beer brand mark the most recent presidential debate, but it also served to solidify the relationship between Anheuser-Busch and the Washington University community.
2.1
Score
Popularity
Activity
Freshness
Access Advisory Services