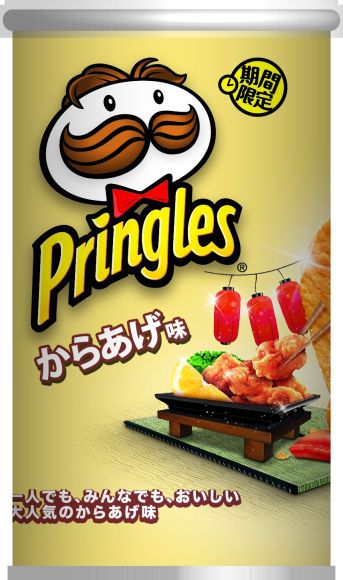 Laura McQuarrie — December 9, 2016 — World
References: prtimes.jp & en.rocketnews24
Share on Facebook Share on Twitter Share on LinkedIn Share on Pinterest
In addition to being produced in their original flavor, Pringles have been made to taste like everything from pumpkin pie to blueberries—now, the latest iteration of the crispy potato snack tastes like Japanese fried chicken. The traditional Japanese fried chicken dish, also known as "karaage," is featured as a main image on the front of the chip canisters, along with elements of a tavern-style setting, such as straw floor mats and overhead paper lanterns.

These limited-edition karaage chips are being sold alongside another popular snack food product—takoyaki octopus balls. These Pringles-branded seafood balls are sold in sets of three and are being offered in limited quantities in some of the top tourist regions of Japan.

These novel Pringles snacks have been launched to coincide with year-end celebrations, especially since many people will be looking for easily sharable finger food snacks.
2
Score
Popularity
Activity
Freshness
Get Better and Faster