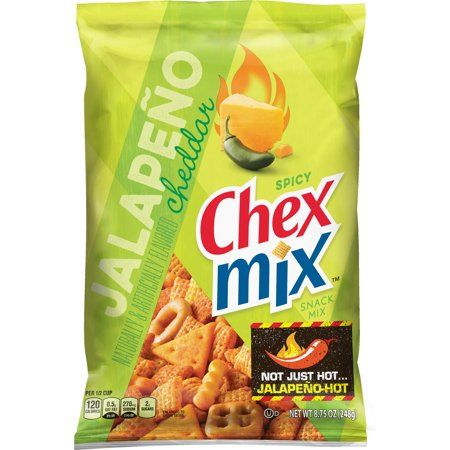 Katherine Pendrill — August 9, 2018 — Lifestyle
References: generalmillscf & delish
Share on Facebook Share on Twitter Share on LinkedIn Share on Pinterest
While Chex Mix is already a wildly popular snack, those whose cravings tend to skew towards spicy may want to pick up a bag of Jalapeño Cheddar Chex Mix. With the same crunch that Chex Mix is known for and a kick of jalapeño peppers, the new snack is the ultimate cure for the munchies.

Jalapeño Cheddar Chex Mix is a cereal-based snack made up of pretzels, mini breadsticks, and Chex Cereal squares. However, unlike the original variety, the Jalapeño Cheddar version boasts a fiery flavor profile that is described as "not just hot...jalapeño hot!"

Best of all, the snack mix contains 60% less fat than regular potato chips, so consumers can satisfy their craving for something salty and spicy without the guilt.