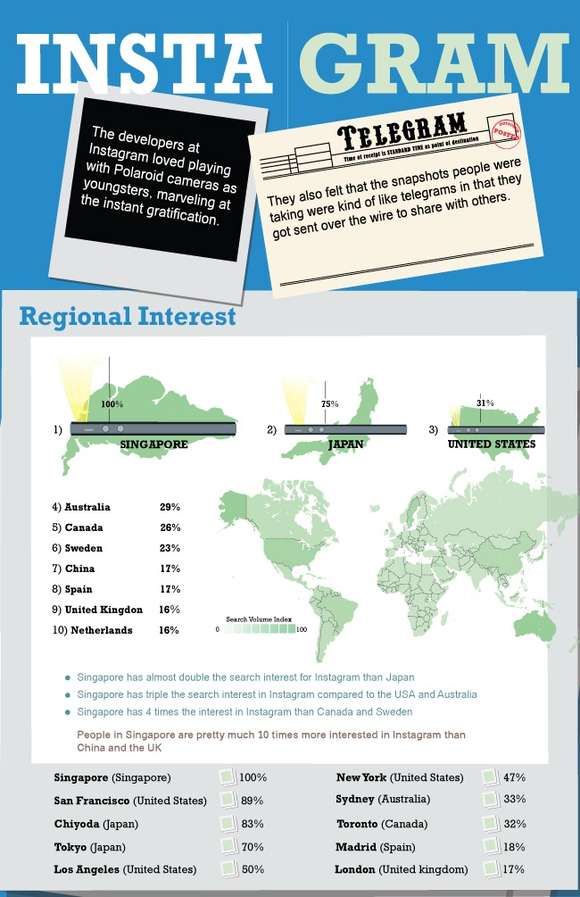 The Instagram Infographic Charts the Success of the iPhone App

Rebecca Byers — March 1, 2012 — Tech
References: infographiclabs & infographiclabs
Share on Facebook Share on Twitter Share on LinkedIn Share on Pinterest
InfographicLabs.com's Instagram infographic graphs the rise and success of the popular iPhone application inspired by Polaroid cameras and Kodak Instamatic cameras of the past. The application, which squares photos and gives them nostalgic style tones, is necessary for any iPhone, with impressive statistics, such as an average upload rate of 15 uploads per second.

The Instagram infographic is filled with similarly daunting stats on the increasingly popular app, which has really become a part of social media culture due to its potential to share photos on Facebook, Twitter, Tumblr and Flickr. Compared to the two years it takes Flickr, Yahoo's professional-feeling photo portfolio site, to acquire 100 million photos, it takes Instagram only eight months. The infographic also outlines the uses of Instagram, including the surprising fact that it has also become a means of spreading news fast.
5.6
Score
Popularity
Activity
Freshness
Attend Future Festival