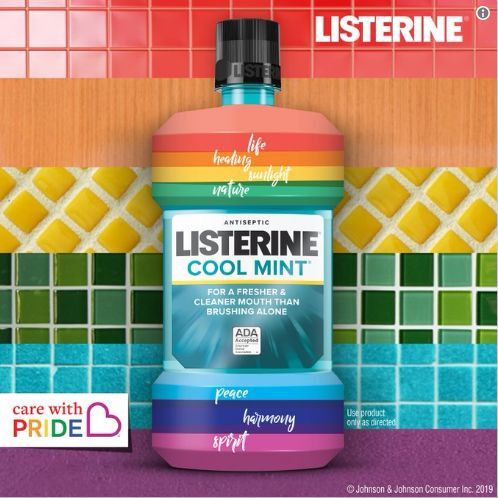 Grace Mahas — May 28, 2019 — Social Good
References: walmart & lgbtqnation
Share on Facebook Share on Twitter Share on LinkedIn Share on Pinterest
June is Pride Month, a month dedicated to inclusiveness for the LGBTQ+ community and to celebrate, Listerine launched an inclusive mouthwash that has a 'Cool Mint' flavor. The bottle is decorated with the original eight-stripes of the rainbow flag, rather than the more commonly used six-stripe flag.

Each stripe represents a unique aspect of the LGBTQ+ movement, however, some have criticized Listerine for incorrectly labeling the pink and turquoise stripe. The turquoise stripe reads "peace," but historically represents "magic." The pink stripe is labeled "spirit" but originally represented "sex." The original eight-striped flag was created after World War II in response to the stigma the community felt, but, when the flag became more commercialized, the turquoise and pink stripes were not included in an attempt to be more politically correct.

While Listerine may have altered the origins of the flag, the brand still aims to help the community. Johnson & Johnson (an affiliate of Listerine) has raised over $1 million for its program to support the LGBTQIA community. Thanks to corporations supporting social good initiatives, we can raise more awareness and support for these underrepresented communities.