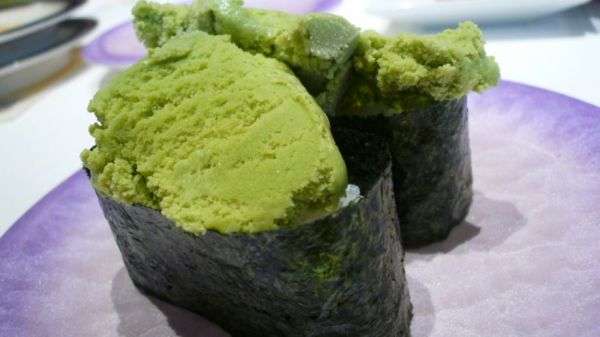 Michael Hines — May 4, 2013 — World
References: kotaku & neatorama
Just when you think you've tried every kind of sushi there is, along comes ice cream sushi. This sweet roll was spotted in Uokura, a sushi chain located in the southern portion of Japan. The roll comes in both green tea and vanilla flavors and sells for about $1.60 a plate.

Although it may seem odd, ice cream sushi has apparently been in Japan for a few years. Reactions vary from person to person, which seems about right considering the fact that ice cream and seaweed aren't normally paired together. In addition to Uokura, a small sushi restaurant in the Mie Prefecture is said to also offer ice cream sushi. With the amount of strange food sold in the U.S. it could only be a matter of time before ice cream sushi makes it across the Pacific.
2.3
Score
Popularity
Activity
Freshness