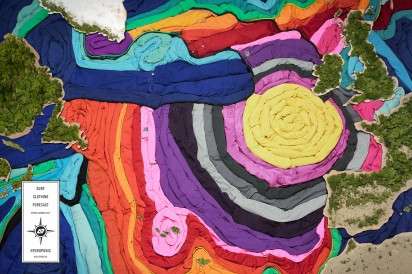 Meghan Young — June 5, 2012 — Lifestyle
References: conquistadors.es & ibelieveinadv
Share on Facebook Share on Twitter Share on LinkedIn Share on Pinterest
The Hydroponic Surf Clothing campaign appeals to surfers' sensibilities. It concentrates on their need to know what the weather will be like the day they go surfing. The surf forecast map parodies this common habit in a colorful and clever way. It is made up of surf clothes, 400 garments to be exact, that have been tightly packed and patterned in a typical weather formation with landmasses superimposed on top to indicate whether it is the Atlantic or Pacific ocean.

Conceived and executed by The Conquistadors Collective, an ad agency based in New York, United States, the Hydroponic Surf Clothing campaign was art directed by Christian Lopez and Quito Leal with creative direction by Mauricio Alarcon and Guy Rooke. Photographed by Javier Tles, the campaign is creative and eye-catching, which is exactly the point.
2.4
Score
Popularity
Activity
Freshness
View Innovation Webinars