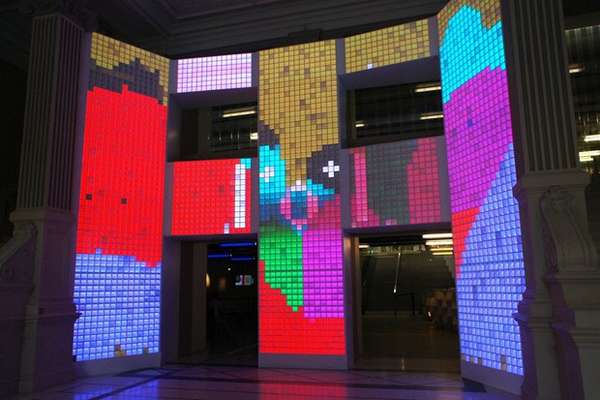 The Hide&Seek Exhibit Can Hear, Smell & Feel Its Users

Katherinev123 — August 10, 2012 — Tech
References: hideandseek.net & wired
Share on Facebook Share on Twitter Share on LinkedIn Share on Pinterest
The Hide&Seek exhibit is an interactive building and gaming structure created by the gaming design company Hide&Seek that can actually sense its users. Made for the exhibition Joue le Jeu, Hide&Seek is itself a game -- it's filled with interactive gaming elements, including arcades and giant social games -- and it has been designed to actually sense users by seeing, hearing, smelling and feeling them.

For example, once you enter Hide&Seek exhibit, the building gets "excited" and displays a message on a giant wall of pixels. When you enter its basement, which is the building's 'nose,' you get to play a game that is a hybrid between golf and snowboarding, which requires you to blow a ping-pong ball through a course into one of the building's 'nostrils,' describes Wired. Upstairs, there is an arcade called Meowton that is themed around cats, and once players have completed all of the four games in the building, they go to the building's brain, a machine with a touchscreen, into which they can input their scores from their games to receive a message that tells them what the building thinks of them.