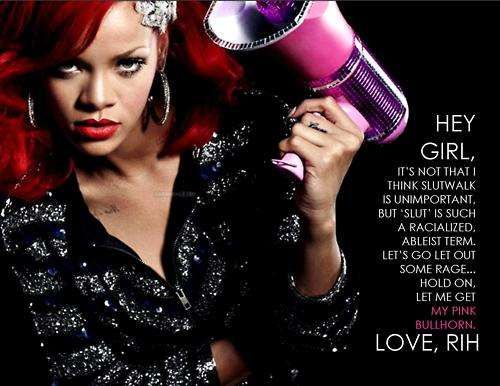 The 'Hey Girl, It's Rih' Tumblr Imagines an Outspoken Rihanna

Heavily influenced by the popular Ryan Gosling memes running wild on Tumblr, 'Hey Girl, It's Rih' imagines Rihanna as a "sex-positive, queer icon" and bares the tagline, "Feminist Rihanna Strikes Again!" While it should never be assumed that all feminists are LGBTQ-identifying, in 'Hey Girl, It's Rih' the two go hand in hand, with pictures of the superstar edited with captions like, "Hey girl, let's occupy each other's nether regions. Love, Rhi."

As a fan of Rihanna, I've come to embrace just about all Rih-related online memes, and this one is no different. Making its debut on January 16, 2012, 'Hey Girl, It's Rih' is still fresh but looks promising, and is worth a follow if you're looking for LOLs!
5.1
Score
Popularity
Activity
Freshness
Access Advisory Services