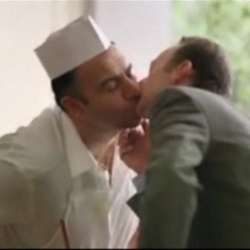 mediterranean — June 27, 2008 — Marketing
References: petitiononline & towleroad
It's a sad affair when a funny commercial with a gay undertone causes a big brand like Heinz to pull the ad. Why the UK Heinz TV spot? Because a few conservatives made some noise about two men kissing in the commercial.

Whatever 'cool' points Heinz might have earned for being open-minded to create such a commercial has been lost and the company is facing big lashings from all sides.

The UK gay rights group Stonewall has launched a boycott of Heinz products for bowing down to 'homophobic individuals'. In pulling the ad, Heinz sends a message to teenagers and kids that having gay parents or showing two men kissing is wrong.

Watch the video above for a CNN's Headline News segment featuring the commercial and a debate between Truth Wins Out's Wayne Besen, Dan Hill, a business marketing analyst and the American Family Association's Randy Sharp.