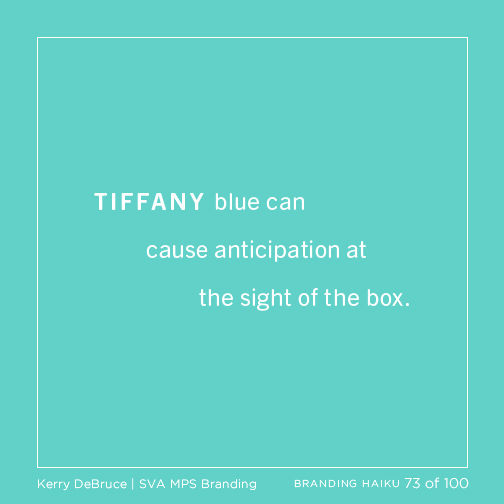 Laura McQuarrie — June 18, 2014 — Pop Culture
References: kerrydebrucebranding.tumblr & designtaxi
Share on Facebook Share on Twitter Share on LinkedIn Share on Pinterest
Sometimes it's hard to put your finger on just what makes a brand the way it is, but Creative Director Kerry DeBruce eloquently nails it every time in her haiku poems. DeBruce started a project called '100 Days of Haiku Poems About Branding,' which features three short lines about big-name brands like Tiffany & Co., Manolo Blahnik and Walmart.

Each poem is numbered from one to 100 and is colored to match the brand's visual identity. Poems describe the "sea of bright colors and scents" at Bath and Body Works, as well as the refreshing burning sensation that comes from rinsing your mouth out with Listerine. So far, DeBruce is 73 days into the project and the entirety of the haiku poems can be found on the Kerry DeBruce Branding Tumblr page.
4.2
Score
Popularity
Activity
Freshness
Attend Future Festival