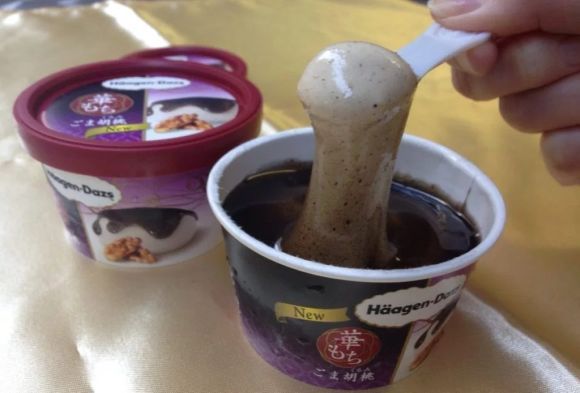 Laura McQuarrie — March 1, 2017 — Lifestyle
References: en.rocketnews24
Share on Facebook Share on Twitter Share on LinkedIn Share on Pinterest
Over the years, there have been many unconventional Häagen-Dazs ice cream product launches in Japan, including desserts inspired by purple potatoes, carrots and even tomatoes. The newest release from Häagen-Dazs is a Sesame Walnut Mochi Ice Cream, which comes in small tubs that feature different layers.

Upon opening the new dessert product, consumers will see a dark, syrupy layer of black sesame sauce. With a little mixing, it becomes combined with the base layer of ice cream with mochi, white sesame paste and pieces of crunchy walnuts.

Because mochi is a Japanese rice cake made from a glutinous short-grain rice, and it is included in this new Häagen-Dazs ice cream product, this particular dessert boasts a texture that looks and feels "stretchy," rather than creamy as per most frozen ice cream desserts.
4.9
Score
Popularity
Activity
Freshness
Attend Future Festival