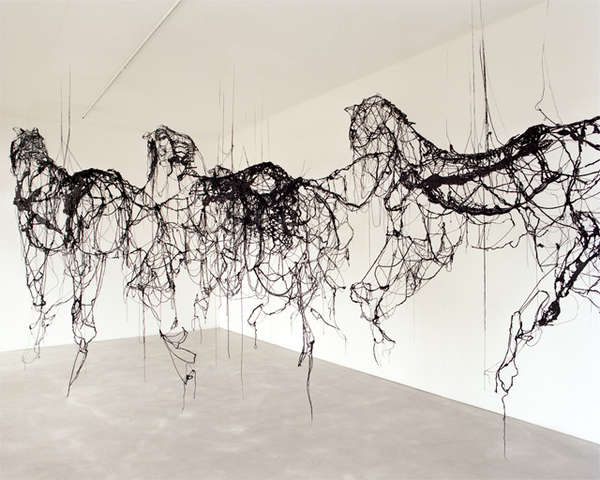 Goodbye Horses by Sandrine Pelletier is Dark and Haunting

Meghan Young — March 30, 2013 — Art & Design
References: maskara.ch & thisiscolossal
Share on Facebook Share on Twitter Share on LinkedIn Share on Pinterest
Hauntingly ethereal and delicately graceful, Goodbye Horses by Sandrine Pelletier, an artist born in Lausanne, Switzerland, and based in Paris, France, is a series of sculptures that look modeled after the rides of the Horsemen of Apocalypse. Since that day doesn't appear to be arising anytime soon, it is only appropriate that the animals would be slowly disintegrating into nonexistence.

Incredibly created out of thin pieces of wool coated in black latex and tar, Goodbye Horses by Sandrine Pelletier made its debut hung from the ceiling at galerie Rosa Turetsky. Visually striking due to the stark contrast between the chaotic lines of the dark figures against the stark white of the gallery walls, the sculptures look almost like abstract, violent illustrations. In fact, some people might not even be able to recognize the horse-inspired figures.
3.8
Score
Popularity
Activity
Freshness
View Innovation Webinars