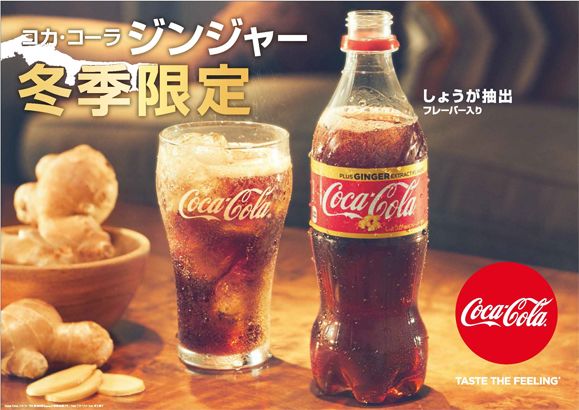 Laura McQuarrie — December 23, 2016 — Lifestyle
References: twitter & en.rocketnews24
Share on Facebook Share on Twitter Share on LinkedIn Share on Pinterest
While there are several different versions of Coca-Cola to be enjoyed, Coca-Cola recently captured the attention of many in Japan by adding a new ingredient to its namesake soft drink. The newest beverage product boasts "ginger extract flavor," but it's about much more than just satisfying one's desire for a spicy taste.

The new warming ginger Coca-Cola Japan product is being sold as a limited-edition release in the winter, specifically to help people ward off the chill of the season.

Earlier this summer, Fanta, a brand under The Coca-Cola Company, launched a 'Watermelon + Salt' beverage with an especially hydrating formula to combat heatstroke. Now that many people have become conscious about reducing their consumption of sugary sodas, drink manufacturers are launching carbonated health-focused beverages in response. These types of products are recognized as FOSHU—Food for Specified Health Uses.
2.4
Score
Popularity
Activity
Freshness
View Innovation Webinars