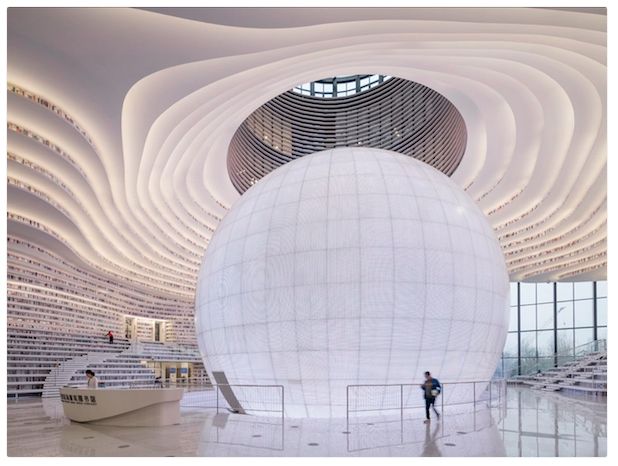 Alyson Wyers — November 30, 2017 — Art & Design
References: mvrdv.nl & designtaxi
This futuristic library in Tianjin Binhai, China was built as part of a larger effort to establish a cultural hub in the district. Designed by architecture firm MVRDV in collaboration with the Tianjin Urban Planning and Design Institute (TUPDI), the Tianjin Binhai Library has a light-filled spherical auditorium with contoured floor to ceiling bookcases surrounding it. As showcased in photography by Ossip van Duivenbode, "the undulating bookshelf is the building’s main spatial device and is used both to frame the space and to create stairs, seating, the layered ceiling and even louvers on the façade."

The futuristic library design received lots of positive attention on social media, especially in China. The cultural center has been described as an "ocean of knowledge."
4.8
Score
Popularity
Activity
Freshness