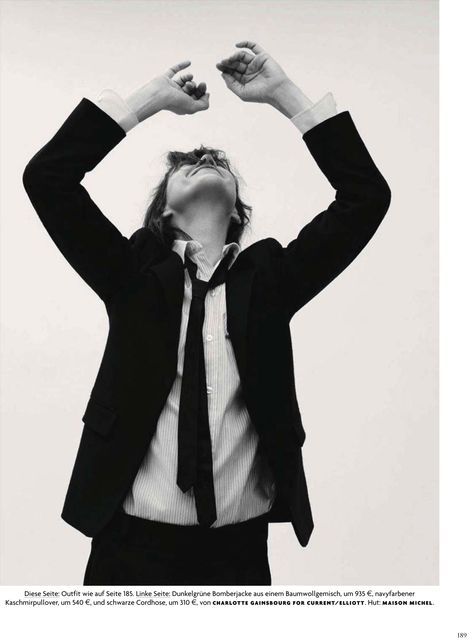 Jordy E — July 19, 2014 — Fashion
References: vogue.de & fashioncopious.typepad
The Vogue Germany August 2014 Ein Bisschen Ich editorial embraces masculinity in its fullest form. Stylist Nicola Knels captured the striking look with ease along with the help of model Charlotte Gainsbourg who made the ensembles appear flawless and approachable for any reader of the publication.

While standard suit jackets and thin ties were present in this Vogue Germany production, Knels also incorporated seldom seen pieces in the photoshoot via dark high rise jeans, baggy oxford shirts and top hats, bringing not only overt masculinity into the fold but also retro apparel and motifs.

Photographer Stefan Heinrichs added to the manly appeal of Ein Bisschen Ich with black and white imagery. In each shot Gainsbourg came across as casual despite the aggressive nature of the apparel featured, speaking to her talent and to the expertise of Vogue Germany.
1.4
Score
Popularity
Activity
Freshness