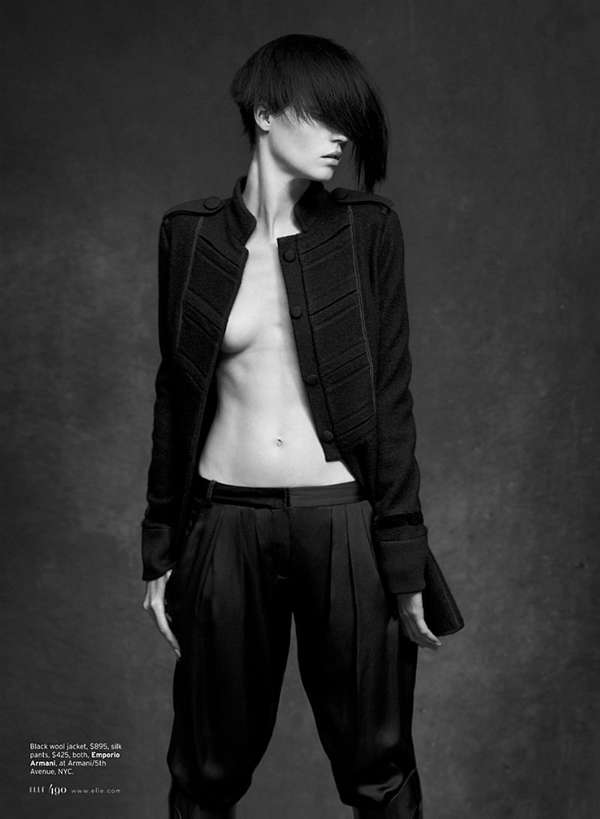 The Egle Tvirbutaite ELLE US September 2011 editorial was shot by St. Louis, Missouri's Thomas Whiteside, a photographer who currently divides his time between New York and Los Angeles, where he has established himself as a photographer to watch in the fashion and entertainment worlds. Whiteside has taken portraits of entertainers Clemence Posey, Adele, Emma Roberts, Zoe Saldana, Arethra Franklin, and Bradley Cooper, just to name a few.

For Egle Tvirbutaite, this ELLE US September 2011 editorial continues a hot streak of successful shoots and runaway shows over the last three years. Some of the major brands she has worked for include Dolce & Gabbana, Roberto Cavalli, Zac Posen, Alexander McQueen, and Louis Vuitton.

In this shoot, she stuns in black and white, with Whiteside doing a careful job of straddling the line of artful sexuality and over the top eroticism. My favorite snap of the shoot is the lead image -- which features Tvirbutaite in a long sleeved dress shirt, her midriff exposed, and her head and hair to the side, exuding confidence, attitude, and seduction in one fell swoop.