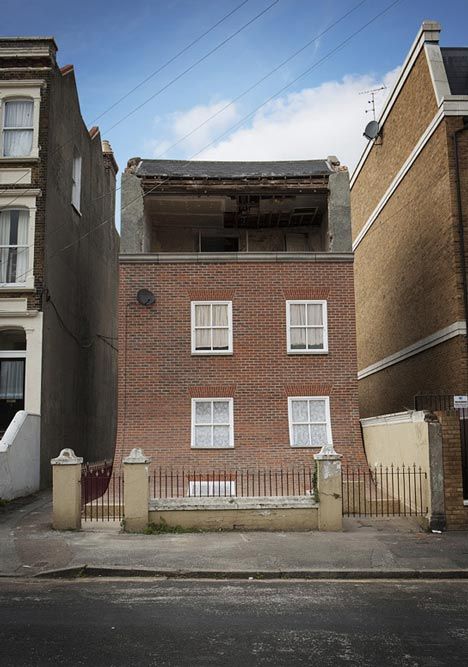 Alex Chinneck has Turned a Dilapidated Home into an Art Installation

Vasiliki Marapas — October 4, 2013 — Art & Design
References: kentonline & dezeen
Share on Facebook Share on Twitter Share on LinkedIn Share on Pinterest
Aleck Chinneck has created a new architectural art installation that features the façade of a house melting away from its structure. Chinneck removed the old façade of the neglected UK home and attached a new one, making sure to leave the top story exposed. The excess of the façade curved away from the house to achieve the “melting” look. This house was slated for renovation into social housing, but movement on the project was very slow, with no plans to begin for over a year.

Chinneck took advantage of this dawdling movement by turning the ramshackle home into an art installment titled 'From the Knees of my Nose to the Belly of my Toes.' He states on his site, “I wanted to create something that used the simple pleasures of humor, illusion and theater to create an artwork that can be understood and enjoyed by any onlooker.” Since the façade looks brand new, it’s a shock to see the dilapidated state of the interior from the exposed top story, which was Chinneck’s eventual intention: “I increasingly like that idea of exposing truth and the notion of superficiality.”

Once a crumbling home, this building is now a thought-provoking art installment which will remain until the house is converted into social housing next year.
0.6
Score
Popularity
Activity
Freshness
Attend Future Festival