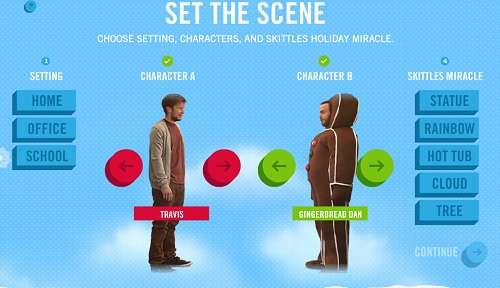 Elise Ying-Hei Ho — December 19, 2012 — Marketing
References: createtherainbow & designtaxi
This Christmas, Skittles is allowing fans to create their own advertisements through its Create the Rainbow campaign.

After logging onto its website, Skittles lets fans decide the setting -- home, office or school -- two characters, and a Skittles Miracle, which oddly consists of choices like hot tubs and clouds. Create the Rainbow also allows users to pick desired dialogue for these characters, which can range from a life-sized Gingerbread Man to a Funky Santa. The interactive ad campaign allows people to get creative and design their own professional commercial. Users can mix and match the events and quotes and the funnest part is that they don't even have to make any sense at all. Just press Play, kick back and cackle like crazy.
4.1
Score
Popularity
Activity
Freshness