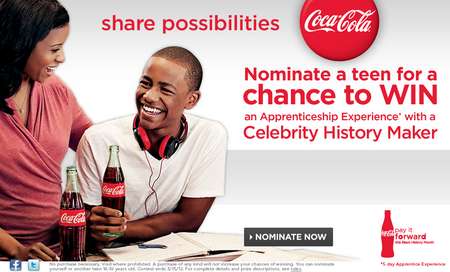 Katherine Vong — February 4, 2012 — Marketing
References: mycokerewards & popsop
With the help of philanthropist and Grammy Award-winner Ne-Yo and other celebs, the Coca-Cola Pay It Forward campaign is encouraging African Americans to do their part in society to become "tomorrow's history makers."

The program, launched in celebration of Black History Month, encourages African Americans to be more active in public initiatives and to take responsibility for the next generation. The Coca-Cola Pay It Forward campaign comprises a public service challenge asking adults to become more involved to guide the youth through activities like career mentoring and homework help. Participants can post the ways they've contributed to the cause by using the hashtag #PayItForward on Twitter.

Youths ages 16 to 19 are encouraged to enter an online contest to win a chance to apprentice with a celebrity. They must be nominated by their parents on the My Coke Rewards site and winners will get to apprentice in four areas including fashion (with designer Tracy Reese), business (with Essence president Michelle Ebanks) and music and philanthropy (with Ne-Yo).
1.8
Score
Popularity
Activity
Freshness