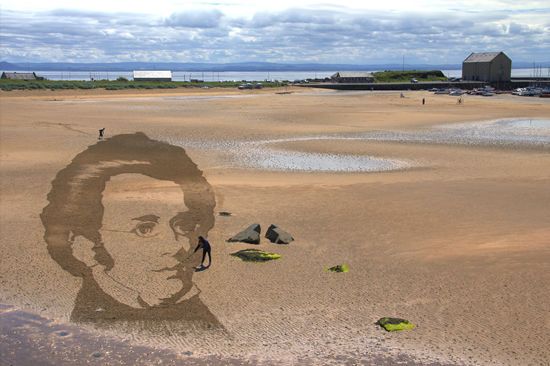 Laura McQuarrie — July 4, 2014 — Eco
References: sandsculptureice & prexamples
Share on Facebook Share on Twitter Share on LinkedIn Share on Pinterest
When you think of a summer music events, your first thought likely isn't about a classical music festival. So, in order to get the word out about Scotland's 2014 East Neuk classical music festival, sand sculpture company Sand in Your Eye was tasked with creating a giant portrait of Franz Schubert on Elie Beach.

The festival will be celebrating its 10th year anniversary and this tribute to one of the great composers is a big gesture, but one that's also very gentle and temporary. The portrait has now been washed out with the tide, but there are some pretty awesome pictures to document the piece of sand art. The impressive sand portrait is anamorphic, meaning that it will look stretched from certain perspectives, but perfect from a certain viewpoint.
6
Score
Popularity
Activity
Freshness
Jeremy Gutsche Keynote Speaker

Experiential Music Photography
This Exhibit Asks How Do You Experience Music