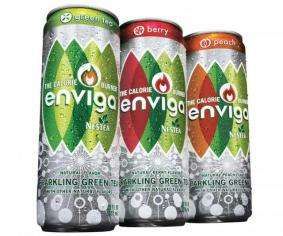 The Enviga Soft Drink Will Cut Out The Gym Factor

Giz Magazine tells us, "The diet soda market has traditionally been a place where the soft drinks didn’t add as many calories as non-diet brethren, but Coca Cola is now readying a product for the U.S. market that is proven to burn calories. Enviga hits the Northeast in November and will roll out across the U.S. in January 2007. Enviga is a sparkling tea containing green tea extracts, calcium, and caffeine, and was conceived by Beverage Partners Worldwide (BPW), a joint venture between Nestle and Coca-Cola. Research shows that epigallocatechin gallate (EGCG), an antioxidant present in green tea, has the ability to speed up metabolism and increase energy use, especially when combined with caffeine. Studies have shown that when EGCG and caffeine are present at the levels comparable to that in three cans of Enviga, healthy subjects in the lean to normal weight range can experience an average increase in calorie burning by 60 – 100 calories."
5.3
Score
Popularity
Activity
Freshness
Jeremy Gutsche Keynote Speaker