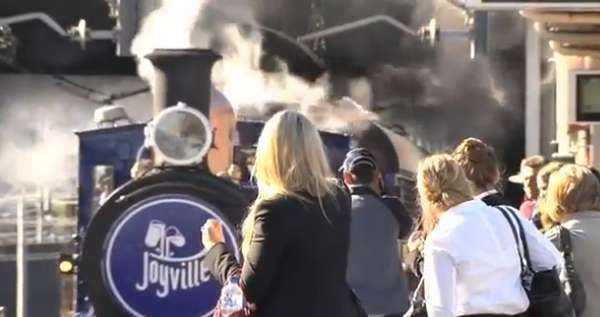 Katherinev123 — June 29, 2012 — Marketing
References: facebook & mumbrella.au
Share on Facebook Share on Twitter Share on LinkedIn Share on Pinterest
Commuters in Australia sure received a surprise when the Cadbury Joyville steam engine rolled up to three different train stations in Sydney, offering free chocolate to all. The stunt, devised by the experiential agency Wonder and filmed by Saatchi & Saatchi, was part of Cadbury's Joyville campaign and involved the brand's workers, dressed all in Cadbury purple, handing out free Cadbury Dairy Milk chocolate bars at each stop.

The Cadbury Joyville steam engine itself was a 1916 locomotive express train based at the NSW Rail Transport Museum, says Australia's leading media and marketing website, Mumbrella.com. Making over the locomotive into a Cadbury train actually took a full year!

As for where the idea sprouted from, Cadbury’s general manager of chocolate marketing Ben Wicks says, "The idea comes from the question ‘how do we bring more joy to the world?’ It’s all a bit gloomy and dim these days so how do we lighten up lives and make people smile?”

Watch the video of the stunt here to see just how many smiles Cadbury elicited that day!
5.2
Score
Popularity
Activity
Freshness
Get Trend Hunter Dashboard