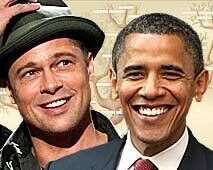 Obama and Pitt's connection dates back to the 1700’s with a man named Edwin Hickman, who we do not historically know much about. Research reports that Pitt and Obama are descendants of each of the two sons that Mr. Hickman had. And, again according to MSN, Brad is not the only member of the Pitt family with a political family connection. Angelina Jolie-Pitt is ninth cousins with Mrs. Hillary Clinton herself.

These family connections don’t necessarily sway the Pitt family votes, however. Angelina has been quoted commenting that she has not yet decided who she is going to vote for in the upcoming presidential election. There’s no denying that the Pitt-Obama relation is going to cause quite a commotion, however.

Who might you be ninth cousins with?
1.7
Score
Popularity
Activity
Freshness
Attend Future Festival Virtual