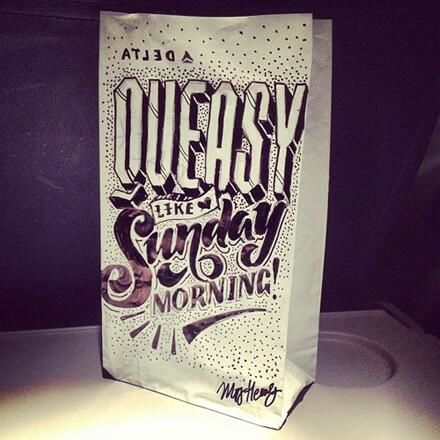 Laura McQuarrie — May 14, 2014 — World
References: qantas.au & theaustralian.au
Share on Facebook Share on Twitter Share on LinkedIn Share on Pinterest
To give passengers something interesting to do on a flight and to boost its presence on social media, Qantas is running 'Blank Canvas,' a social campaign asking people to draw their best designs on their sick bags, napkins, boarding passes and luggage tags.

The Blank Canvas campaign is running throughout the month of May and travellers are being encouraged to show off their creations with #qantasblankcanvas on Twitter or Instagram. These are collected and displayed on one of Qantas' webpages, and the best artists have the chance to win a double Qantas Club pass.

The campaign was inspired by Australian typographer Gemma O'Brien and her original artworks will be on display at the Sydney domestic airport Qantas Club, as well as online at the charmingly named 'Spew Bag Challenge' Tumblr blog.
5.3
Score
Popularity
Activity
Freshness
Attend Future Festival Virtual