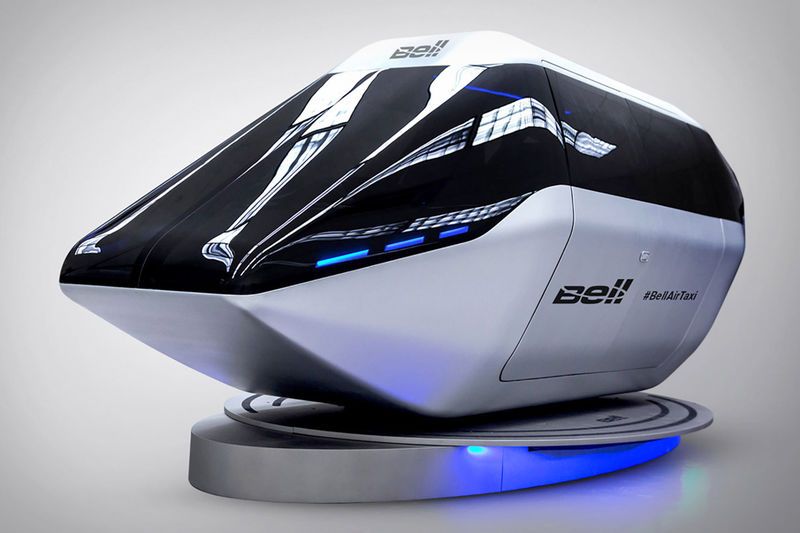 Justin Lam — January 16, 2018 — Tech
References: mashable & yankodesign
Share on Facebook Share on Twitter Share on LinkedIn Share on Pinterest
Flying taxis have long been a staple of science fiction, but thanks to the Bell Helicopter Air Taxi these concepts may soon be a reality. Debuting at CES 2018, the Bell Helicopter Air Taxi was the company's offering as a viable solution to ground traffic. The four-person aircraft is designed with local transportation in mind and is meant to fly people between two points. Though the vehicle is designed with human controls, the ultimate goal is to have a fully autonomous vehicle. While the vehicle did not take flight at CES, Bell Helicopter did provide a simulation of the ride using VR that clearly impressed users as Uber expressed interest in partnering with the company.

The Bell Helicopter Air Taxi is an impressive piece of tech that not only boasts faster travel, but also touts a full suite of connectivity technologies. With video calling, WI-FI, artificial intelligence and wireless charging, the air taxi is clearly designed for the purpose of chartering around business-minded individuals. This impressive piece of technology is currently being shown as a concept, with Bell Helicopter yet to announce the type of propulsion it will use. That being said, this initial offering already has enthusiasts buzzing and could be the spark that ignites the air taxi revolution.
6.2
Score
Popularity
Activity
Freshness
Access Advisory Services