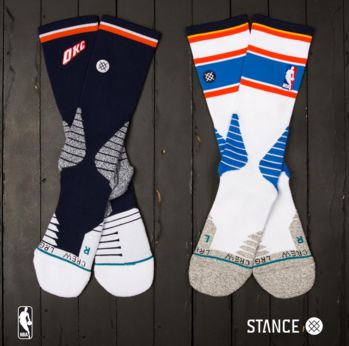 Christopher Magsambol — October 21, 2015 — Fashion
References: twitter & stance
The NBA and Stance Hoops have teamed up for an athletic sock collection just in time for the upcoming 2015-2016 season. As the league's official partner this season, Stance has conjured up 60 different athletic sock styles, two for each of the 30 teams in the league. Most of the socks follow a similar pattern but have specific team colors, logos and team names providing individualized details.

More importantly however, this athletic sock collection is not only meant for fans to support their favorite team, they are also designed to be worn by NBA stars during games. Each part of the sock has been designed to ensure comfort and performance. Some of these features include the use of fusion fibers to prevent hot spots, perfectly fitted heels and extra dense cushioning.
2.1
Score
Popularity
Activity
Freshness