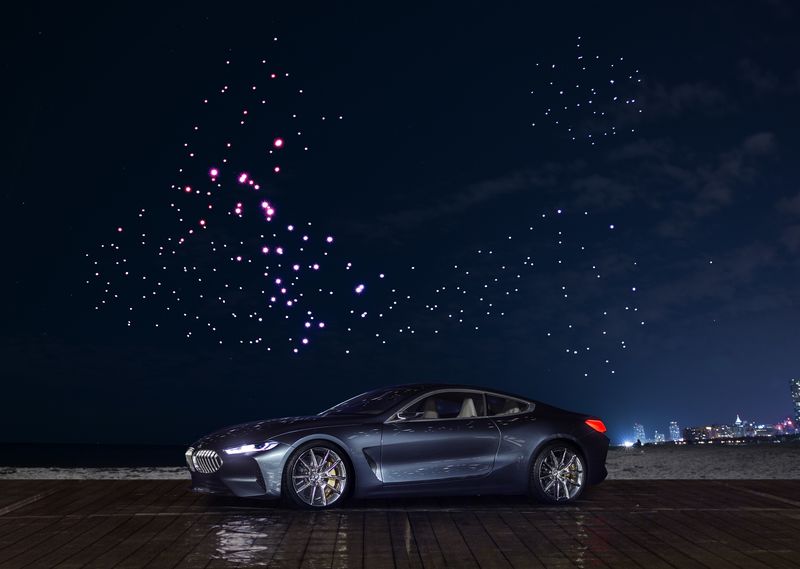 Jana Pijak — January 12, 2018 — Autos
References: press.bmwgroup
Share on Facebook Share on Twitter Share on LinkedIn Share on Pinterest
'FRANCHISE FREEDOM' is an immersive art installation created by Studio Drift in collaboration with BMW, and was unveiled at Miami Art Basel 2017 earlier this month. Consisting of 300 flying drones that were illuminated atop a night's sky, the art piece can be described as "an interface between technology, science, and art."

Mimicking a natural, star-filled sky, this flying sculpture was dramatically showcased by the water at sundown, and explored the theme of the group versus the individual. Questioning both the idea of safety in numbers, as well as the importance of the independent self, the piece involved the programming of drones which were customized with software to emit a glow similar to that of real stars.

“We were impressed by the courage of BMW to get involved here, as an artwork of this scope and scale has never even been tested before. They believed in our idea because they fully comprehend how complicated and intricate those innovative processes are,” said Studio Drift co-founder Lonneke Gordijn about the partnership.

By joining forces with artists and an event like Miami's Art Basel, BMW proves its relevance among Millennial consumers and adopts a more visual marketing approach while simultaneously promoting its own brand values and artistic process.
6.7
Score
Popularity
Activity
Freshness
Get Trend Hunter Dashboard