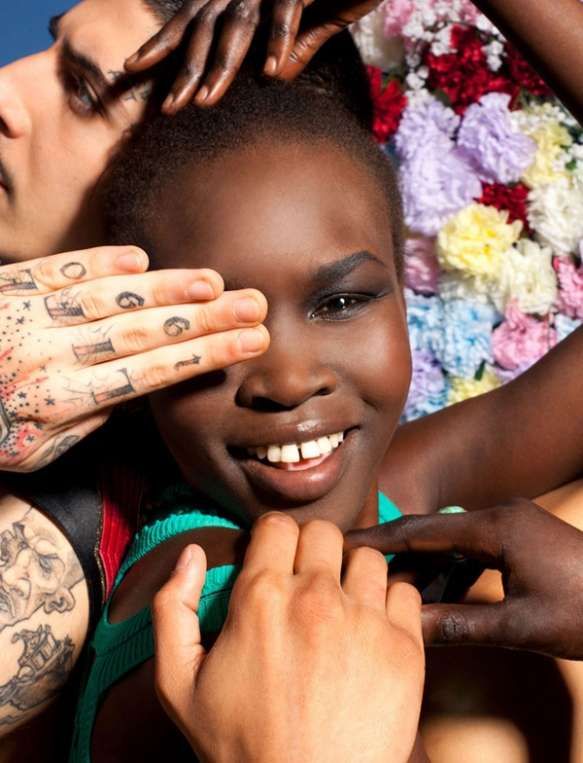 Corinne Guirgis — July 26, 2011 — Fashion
References: matthewstone & piecesnmelodies
Share on Facebook Share on Twitter Share on LinkedIn Share on Pinterest
Rarely does fashion photography cross cultural boundaries in a way that is both moving and beautiful, but this Alek Wek Summer 2011 iD Magazine spread achieves both of these things to an unmatched degree. Shot by Matthew Stone, who is an artist and a shaman and whose work focuses entirely on optimism as cultural rebellion, the shoot is aesthetically and socially enlightening. Stone is quoted in saying that “Optimism is the vital force that entangles itself with and then shapes the future." This powerful message is conveyed in all of his art, as he gears his philosophies and work toward changing the core of 21st century thought.

According to biographer Karley Sciortino, "Stone’s whole being is geared toward a life lived as art. His personalized definition of Optimism as a method for avant-garde thought and art practice, inverts the nihilistic cultural dialogues of the late twentieth century to create a necessary space for vibrant new ways of being." This Alek Wek shoot is just one of many that use striking imagery to move for social change, and I can't wait to see what else Stone has in store for the world.

Implications - Consumers look to art for many reasons. Among them, aesthetically appealing imagery, the portrayal of raw and familiar emotions, and finally the depiction of deeper meaning that may or may not be socially conscious.
6.4
Score
Popularity
Activity
Freshness
Attend Future Festival

Global Patterntography
Alek Wek Models Fashions from Around the World