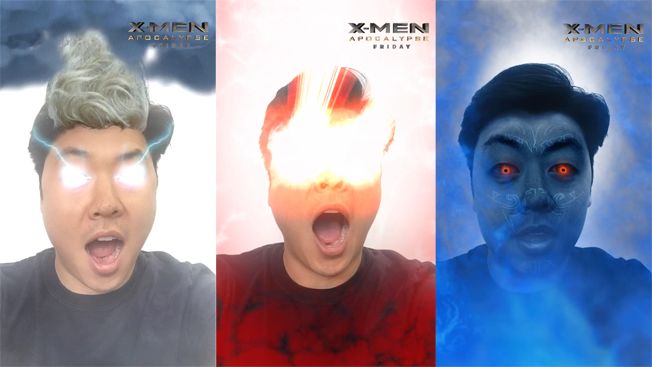 Rebecca Byers — May 24, 2016 — Tech
References: adweek
Share on Facebook Share on Twitter Share on LinkedIn Share on Pinterest
The 20th Century Fox Snapchat takeover featured an interactive sponsored lens that let users pick from nine X-Men characters. The innovative use of the sponsored lens ad format is a first for the film studio, with the ad running for 24-hours within the US on May 23, 2016.

The nine characters featured in the movie-promoting ads were Beast, Storm, Cyclops, Magneto, Professor X, Quicksilver, Apocalypse, Nightcrawler and Mystique. The 20th Century Fox Snapchat campaign is the first time a brand has paid to take over the entire selection of lenses within the app, with mixed responses from users on Twitter trickling in thus far.

The 20th Century Fox Snapchat takeover is in promotion of the release of the studio's 'X-Men: Apocalypse' film the following weekend. Although the app has not yet incorporated direct e-commerce capabilities, users will be able to follow an in-app link that takes them to a third party site where they can purchase tickets to see the film at a theater near them.
4.7
Score
Popularity
Activity
Freshness
Get Better and Faster