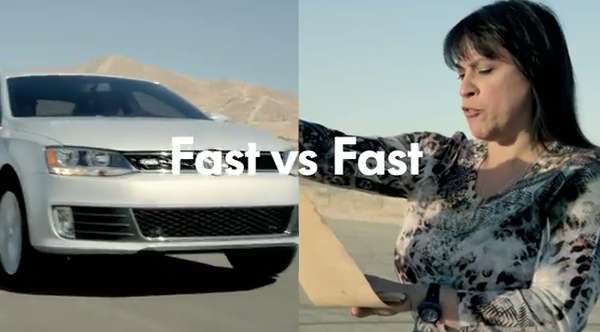 The campaign comprises a series of commercials in which the 2012 Jetta GLI has to complete one lap around a track before the other person can finish what they're doing. In this particular video, the car must finish the lap before speed talker Fran Capo finishes reading the Gettysburg Address while buckled in the car. The person driving the car is Eric Norris -- Chuck Norris' youngest son -- who is a professional driver and stuntman.

In the end, the 2012 Jetta GLI comes out the winner -- although it must be noted that the people probably weren't able to perform their best while sitting in a rapidly moving car. Nonetheless, the Volkswagen's Fast vs. Fast campaign is still a great way to promote the car's speediness and 200 horse power engine!