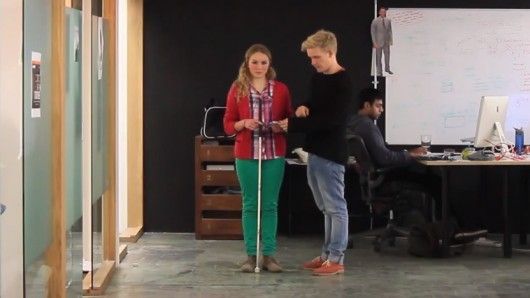 The wayfindr System Guides the Blind Through London's Subway System

Rahul Kalvapalle — August 9, 2014 — Tech
References: rlsb.org.uk & gizmag
Share on Facebook Share on Twitter Share on LinkedIn Share on Pinterest
The wayfindr system was developed in response to a survey conducted by the Royal Society for Blind People (RSBP) in London, England, that found that about half of blind youth are uncomfortable using the city's subway system, the London Underground.

The RSBP's youth forum partnered with design firm ustwo to create the wayfindr system, which uses a combination of Bluetooth beacons, an app and special bone conduction headphones to guide users through the subway system.

The beacons are essentially iBeacon-based Estimote modules placed at strategic locations around the London Underground system. These devices can notify nearby iOS mobile devices of their presence.

The wayfindr's app picks up the signals of the three nearest beacons, compares the strength of the signals and assesses the user's location relative to the waypoints. The app then delivers spoken navigational cues to the user via special headphones that send vibrations through the cheek bones. This way, users' ear canals aren't blocked, allowing them to still hear what's going on around them.
3.8
Score
Popularity
Activity
Freshness
Access Advisory Services