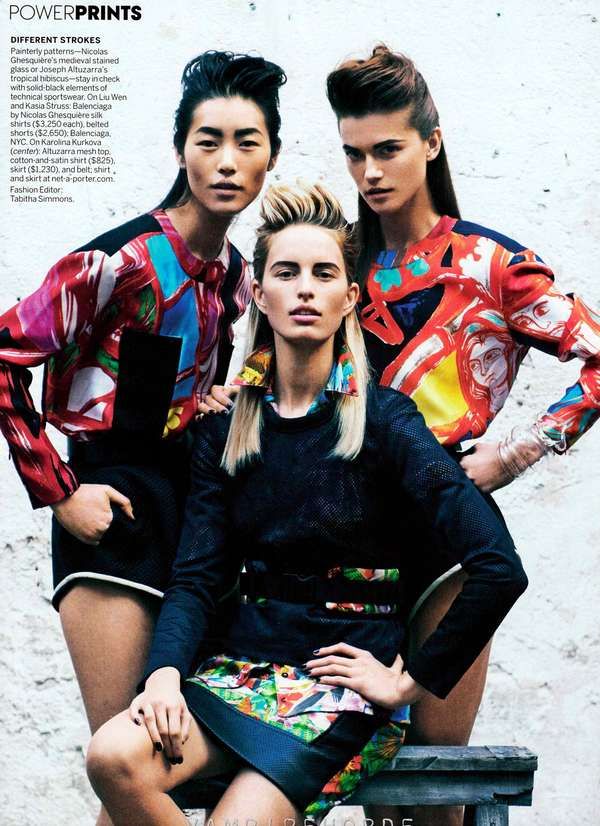 Vision Quest by Peter Lindbergh for Vogue Us March 2012

Rebecca Byers — February 24, 2012 — Fashion
References: vogue & fashionscansremastered.net
Share on Facebook Share on Twitter Share on LinkedIn Share on Pinterest
Lui Wen, Karolina Kurkova, Kasia Struss, Joan Smalls, Cara Delevingne and Fei Fei Sun star in 'Vision Quest,' an editorial with a panoply of patterns for Vogue US March 2012. The hectic shoot is filled with tailored silhouettes in the boldest prints and was photographed by Peter Lindbergh.

The bright fashions are set off by the white cement wall that serves as a backdrop and features a natural makeup look that puts an emphasis on thick eyebrows. 'Vision Quest' is a star-studded shoot featuring six of the hottest models of the moment and was styled by Vogue fashion editor Tabitha Simmons.

'Vision Quest' is one of several phenomenal editorials in the Vogue US March 2012 issue, the publication's second largest and most important edition after September, and will be covered by British songstress Adele.
6.1
Score
Popularity
Activity
Freshness
Get Trend Hunter Dashboard