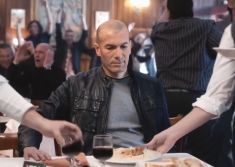 Rahul Kalvapalle — May 23, 2014 — Lifestyle
References: visa & thedrum
Zinedine Zidane and Fabio Cannavaro may have retired from soccer years ago, but they are set to make a return in the upcoming World Cup; not on the field but off it, as part of a VISA World Cup ad set to air during half-time ad breaks.

The ad shows Zidane, considered the greatest French player of all time and one of the greatest players ever, stepping into an Italian restaurant where a World Cup game between France and Italy is being aired. It just so happens that Italian World Cup-winning captain Fabio Cannavaro is also in the joint.

As the game proceeds, Zidane and Cannavaro get absorbed in their respective patriotic fervor and become embroiled in a heated face-off.

This VISA World Cup ad has already been released in Brazil, but will be rolled out in over a 100 other countries from June 1.