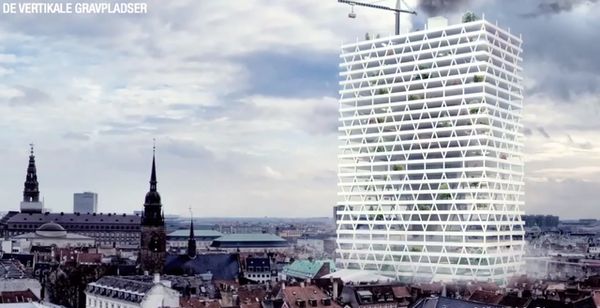 Meghan Young — December 13, 2013 — Art & Design
References: kirkegaardskultur.no & theverge
Share on Facebook Share on Twitter Share on LinkedIn Share on Pinterest
With the world population increasing as it is, the concept of the Vertical Cemeteries does not seem so ludicrous. In order to maintain a semblance of dignity and tradition in death, such measures most likely will have to be taken in order to accommodate the increase of death, which comes with so much life.

Designed by Martin McSherry, an architecture student, the Vertical Cemeteries was recently presented at the Oslo Conference for Nordic Cemeteries and Graveyards. A possible solution to the country's growing burial land problem, the Vertical Cemeteries would stand tall, white and airy with an adjoining, permanent crane next to it. Although this design is very new, vertical cemeteries have been practiced for some time.
2
Score
Popularity
Activity
Freshness
Get Trend Hunter Dashboard

Graveyards as Architectural Masterpieces
Cemeteries of the Century